Remington pays tribute to one of the sport's greatest competitive shotgunners, Rudy Etchen (1923-2001). 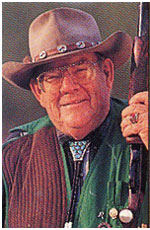 We lost one of the world’s greatest shotgun shooters, avid sportsman and our good friend the other day. F.R. Etchen, born in Chicago in 1923, passed away in Bozeman, Montana August 27, 2001 at the age of 78 and left us with a mixture of extreme sadness and pride.

"Rudy", to all his friends, held almost every Trap & Skeet shooting title and was a member of 14 All American Teams. He was the winner of the "North American Clay Target Championship" at the Grand American in every category; Sub-Junior, Junior, Amateur, Professional, Veteran and Sr. Veteran, a winner of the North American Doubles Championship 5 times, on 14 All American Trap and Skeet teams, and at 14 years of age won the Kansas State Trap Shoot. At the 1950 Grand, shooting one of the first Remington Model 870 pump guns produced (the same gun he would shoot throughout the remainder of his career) he broke 100 straight in doubles; one of the first ever recorded. He repeated this feat again 32 years later at the Louisiana State Shoot in 1982 by breaking 100 straight with the same pump gun. These titles go on and on, and include winner of the World Live Pigeon Championship HOA in 1966 in Mexico City, winner of the Live Bird Championship in Monte Carlo in 1955, in Madrid 1955, in Paris 1955 and Columbaire Championships in Seville, Spain 1965, Madrid 1966, Egypt 1955 and was high score 3 years in a row at the Grand National Quail Championship in Enid, Oklahoma. Unquestionably, Rudy’s accomplishments with a shotgun place him with the top echelon of the shotgunner’s world.

But we at Remington miss Rudy, our friend, confidant, advisor and at times, mentor. Those of us who have attended a Shot Show, Grand American or Writer’s Seminar with him found that his circle of friends was wide and touched every corner of this country. As a life member of the ATA, NRA, and a member of the prestigious Bear River Club, Wigwam Club, Rolling Rock Club and Grand National Quail Club, he rubbed elbows with all of us as well as some of the "who’s who" in American business. Rudy could not move from one side of a room to the other, walk a trapline, or stroll the halls of the Shot Show without bumping into an endless number of folks wanting to visit with him, get his autograph on some magazine or just be in his presence. At times we had to avoid a "short stop" with him at some major event, just to keep on schedule our daily appointments.

In 1998, Remington asked Rudy to strike a pose with his famous Model 870 and Etchen style stock, his shooting vest and western felt hat with southwestern hatband laden with conches of his liking. This photo captures Rudy, as I will remember him, the great smile, reflecting his vibrant lust for life and the shooting community, his love of the southwest evidenced by the Native American bola tie and the ATA Hall of Fame ring.

Rudy made his mark among us all and will be long remembered for not only his success with the shotgun but his deep friendship, love of the Remington Arms Company and its products, and his contribution to their design and style.

On a personal note, my pal Rudy left a hole in my daily life. I will sorely miss him, miss our fishing at the Wigwam Club in Colorado, our hunting trips, our great laughs together, and his frequent calls to my office and home. Rudy, may you rest in peace and since you are already there, please pre-register us for that Championship in the sky as well as stake out that new fishing hole for us.