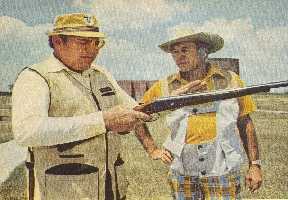 Rudy Etchen was born in Chicago in 1923. Now 53 years later, even a partial listing of his more formal shooting achievements is a rare and most impressive document (See page 73). There are hundreds of celebrated trap and skeet shooters and many fewer celebrated live-bird and field shots. But this man has been a champion in every one of these - in the toughest kind of competition - both at home and internationally!

Whether or not Rudy is the best all-around shotgunner in the world, as many who should know contend, is academic. The fact remains that no one man has established this kind of record, at all kinds of shotgunning, over such a long period of time.

Rudy's father, Fred Etchen, was a legendary shot in his era. He was a fabled field shot, superb at trap and in the live-pigeon ring - and later excelled at skeet when it came into being. In 1924, Fred was Captain of the U.S. team which won the Olympic championship in Paris, France. Following the Olympics he won the European Open Trap Championship with 200x200. Two shells were allowed at each target, but Fred won it the hard way, using only one shot per bird because his Winchester Model 12 pump wouldn't feed the short-length English shells.

But Fred Etchen's real fame was as a shooting teacher. And he lavished his affection and skills on his only son.

A lot of young shooters come and go. But Rudy was in the upper echelons to stay. In 1952, he won the high-trap-singles average with a 99.20 percent and repeated this in 1953 with a fantastic 99.12. He backed that up by also winning the high-national-doubles average three times and in handicap as well from the then back yardage mark of 25 yards.

But it would take a book in itself to tell about Rudy's famous wins and shoot-offs. It's more fun to find out what Rudy does - and why - so we can do a bit better ourselves. So let's do that.